Just a question I sometimes ponder....

Why is it that men seem so intent on overdoing it when it comes to exercise? Is it a macho thing? Is it to prove that they are just as fit as they were in high school? Is it a fear of being out-shined by their possibly-more-fit friends? What IS it?
And, of course, when I say "men", I mean one man: my husband.

Joe used to be a ranked tennis player in Oakland WAY back in the day-- like, maybe 20 years ago.
To this day, he loves to play tennis and is always looking for a partner. Recently, he has been playing a friend of his who, due to the current job market, has some time on his hands.

Joe has played this guy three times. The first time, they played for four hours. That's right- FOUR hours. Without a break. That may be fine for people who play tennis regularly but, for those who decide to pick up a racket after not playing for over a year, it's a bit excessive.
Joe was hobbling around our house, whimpering, for the next 3 days. Oh, and he lost the game, which didn't help matters.

The next week, they played again. This time, Joe scuffed the big toe on his left foot. Somehow he dragged the toe along the pavement until the thing started bleeding under the toenail. His toenail is now black. He lost that game, too, and decided it was because of his new racket which is lighter than his old one.

The third and most recent time, Joe returned to the courts with his old, heavier racket and gave it his all. When he returned home, the big toe on his right foot was black, his right wrist was sprained, and he had fallen on both knees. For the next several days, I had to hear about his wounds and how he was concerned that if he removed the band-aids on his knees too early, he may re-open the scabs. Every time he gave me a hug, he did it from a bent position, his butt sticking out, so that his knee scabs did not get caught on my clothing and cause a knee bleeding emergency.

Was it terribly insensitive that I laughed whenever I saw him? 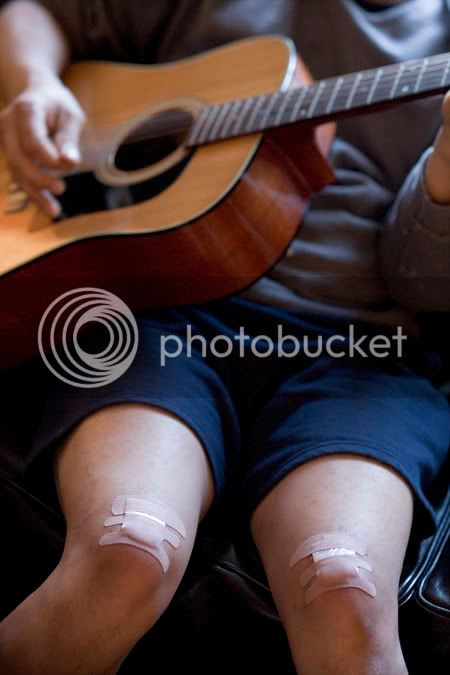 I totally get it, Clare. When Brian sprained his ankle it was like the world was ending. Fun times :)

Clare, my vote is that you were insensitive to laugh. Poor Joe! I feel for him. It's only because you wrote this piece with humor that I laughed all the way through it.